A walk across the famous Nuremberg Christmas Market (Christkindlesmarkt) in the middle of the festively decorated Old Town is like a trip to the Christmas Wonderland: Fresh-scented Gingerbread as far as the eye can see, lovingly lined up in the glass boxes, in which the fairy lights of the green fir branch decorations sparkle, rustic and inviting wooden huts where hot mulled wine is served in a cosy and rustic atmosphere, and a historic stagecoach that makes its way through Nuremberg's Old Town to the Christmas post office with the ringing of bells and the clacking of hooves. Welcome to the Franconian Christmas market, which not only enchants the people of Nuremberg!

Almost 200 traders offer their goods at the Nuremberg Christmas Market. Most of them have a tradition in Nuremberg: Fine Nuremberg Lebkuchen, fruit bread and other delights from the regional Christmas bakery, but also Nuremberg grilled bratwursts and the Nuremberg "Zwetschgenmännla" made from dried plums. Visitors from all over the world buy gifts and souvenirs, handmade Christmas decorations and delicious spices in the warm light of romantic lighting. But this is only the classic Christmas market, there is more to come!
Christmas is special for children. That's why a visit to the Nuremberg Christmas Market every year is an experience that the little ones look forward to. Since 1999, the Nuremberg Children's Christmas has therefore been held on Hans-Sachs-Platz next to the main market square - and it's a celebration for the whole family. The magic of children's Christmas joy is created there with all kinds of attractions to join in.

A Nuremberg Christmas tradition for centuries

It is not known when the Nuremberg Christkindlesmarkt was held for the first time - the Christmas market is already that old. One of the oldest items of evidence is a box made of coniferous wood and is in the Germanic National Museum in Nuremberg. The inscription there refers to the year 1628 and the "Kindles-Marck". However, the ancient name 'Christkendleinsmarck' was explicitly documented in 1697 and the Christmas character of the market must have been created at least since that time more than three centuries ago. Previously, mainly everyday goods were sold, as historians assume. Letters from the Nuremberg councilman Willibald Pirckheimer (1470 to 1530), however, tell of nuns who were already looking for spices on the market in 1530. This probably refers to the early Christkindlesmarkt.

At the end of the 19th century and the beginning of the 20th century, the Christkindlesmarkt receded into the background and was at times even moved away from the main market. It only returned in 1933 and was ceremonially revived with an actress dressed as the Christ Child. During the Second World War, however, the Christmas market was paused - it was not until 1948 that it was reopened in the destroyed old town. This time, the Nuremberg actress Sofie Keeser played the Christ Child and since 1966, a young woman has held the office of Christ Child for two years at a time. Two highlights in the history of the Nuremberg Christkindlesmarkt were added in 1986, with the addition of the Twin Cities Market and in 1990, with the Nuremberg Children's Christmas.
+1 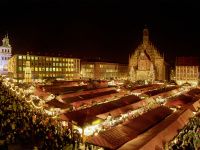 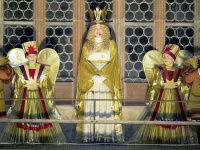 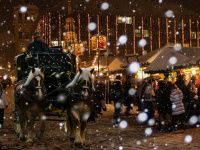 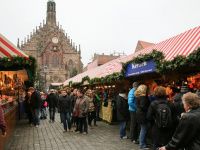 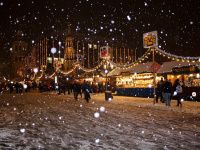 Christmas international: The Christmas market of the twin towns
Not far from the main market, the market of the twin towns on Rathausplatz directly adjoins the classic Christmas market. Here, you will not find the traditional goods from Franconia, but from all over the world: Sweet shortbread from Scotland, mulled wine from Switzerland, arts and crafts from Turkey, pearl jewellery also from China, Venetian masks from Italy and much more. 22 stands from all over the world make the world here really look like a village and no stand is like another. Nicaragua, Greece, Sri Lanka, Cuba, the United States and other countries invite you to take a close look at each stand. Many of the international specialties are otherwise hard to come by - this is especially true for baked goods and alcohol from faraway countries. This is your opportunity! 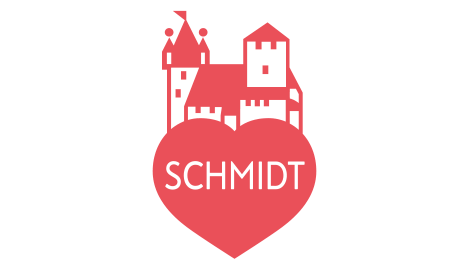